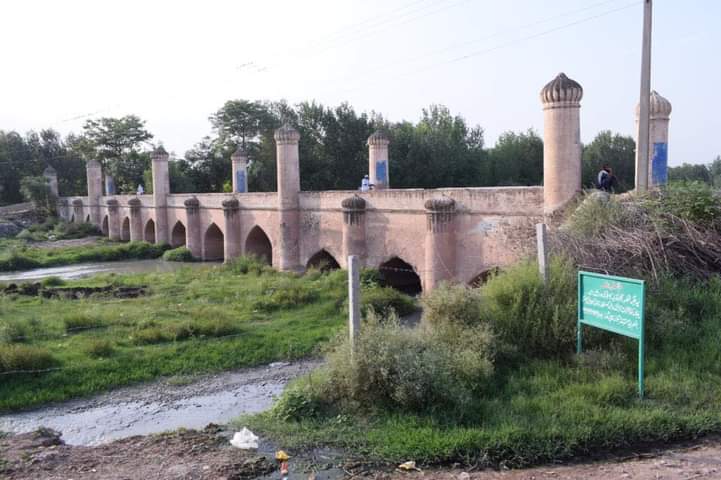 Situation on the outskirts of Peshawar in Choha Gujjar village, the bridge has four different names – Chuha Gujar, Speen, Sethian and Bara Bridge.

PESHAWAR: The bridge, having stood tall for centuries since being constructed by the Mughal Emperor Shah Jahan, is now in urgent need of repair and rehabilitation.

The 400-year-old bridge over the Bara River is a masterpiece of Mughal architecture and is still useful for commuting. Situated on the outskirts of Peshawar in Choha Gujjar village, locals know the bridge by four different names – Chuha Gujar, Speen, Sethian and Bara Bridge.

Though there is no record available about its actual date of construction but historians are of the view that it was built 400 year ago during Mughal emperor Shah Jahan era. However, some historians do not agree with this statement, saying that it was constructed by Sher Shah Suri who ruled India from 1476 to 1545. There is also another view is that the bridge was built by Haji Karim Bakhsh Sethi, businessman and a philanthropist in Peshawar. There is, however, no evidence. Sethi has constructed the seven palatial Havelies in Mohallah Sethian in 1882 in Peshawar.

The bridge, still used by heavy vehicle, consists of 12 arches, 10 minarets. It is 100 yards long and six yards wide. The bridge has six feet tall pillars on each side topped with beautiful domes. Though the structure of the bridge is still intact, but the minarets and embankments are in dilapidated conditions. Two of the domes have also fallen off recently.

The bridge which has served the people for centuries is made of Waziri bricks, putty and lime. Residents of the area call the bridge as speen pul (White bridge) because of its white colour.

The Khyber Pakhtunkhwa senior Minister Taimur Salim Jhagra accompanied by Advisor to chief minister on information Kamran Bangash and member KP assembly Ayesha Bano this week visited Chuha Gujjar. On this occasion, Jhagra urged the Irrigation Department, Local Government Department and Archaeological Department to repair and renovate the histor bridge. “A plan is being prepared for the river and every possible effort will be made to preserve the bridge,” Jhagra said.

A historian Muhammad Usman Mardanvi said that for the protection of the bridge, Khyber Pakhtunkhwa government has decided to build an alternate bridge for transportation with separate road diversion. Mardanvi said that in such situation, the government has to make efforts to protect the nearby ancient Banyan tree and declare it as a State Heritage, because in his view it is more ancient tree than the Pipal Mandi Peshawar.