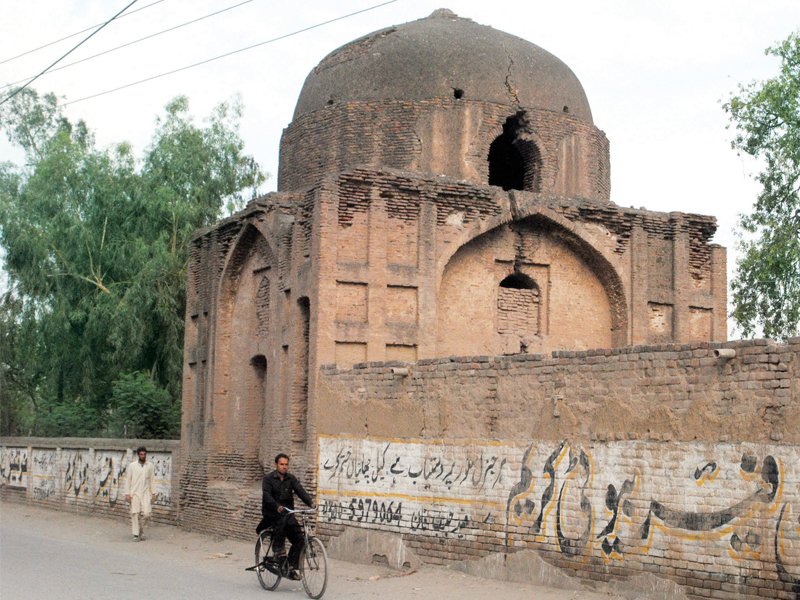 PESHAWAR: Beejo di qabr, a historical but crumbling mausoleum inside the Durrani Graveyard, in Peshawar reportedly marks the grave of Bibi Jan – the beloved mistress of King Timur Shah Durrani.

Although there is no written record available, but the Hindko folklore say that Bibi Jan was a slave of Durrani King Timur but because of her beauty and intelligence, she ruled the heart of the king, something the queen strongly despised. It is said that the queen was much disturbed by their relationship. The folklore goes on to claim that the queen ended their relationship forever by killing Bibi Jan with a cup of poison.

The story is about two and a half hundred years old when the Durrani dynasty ruled in Peshawar, northern Afghanistan and India. Timur was the second ruler of the Durrani dynasty and has ruled the empire from 1772 till his death in 1793. King Timur had declared Bala Hissar fort in Peshawar as capital where he used to stay in winter.

The Khyber Pakhtunkhwa directorate of archaeology and museum said that the mausoleum was built by King Timur in 1780 within the royal graveyard to honor his beloved “concubine” Bibi Jan. There is a grave which according to folklore is the grave of Bibi Jan. The mausoleum is built of traditional brick masonry binded by lime morter with in arch style with two doors and a central doom. The walls were left unfinished due to unexplained reasons.

It is said, out of hatred, the queen referred to Bibi Jan as ‘Beejo‘ meaning monkey in Persian. The love story of Bibi Jan is still narrated by locals and believe that it mausoleum was left unfinished because of King Timur’s death in 1793. However, Historian Ahmad Hassan Dani, in one of his books, wrote that it cannot be said with certainty that the person buried in this mausoleum is Bibi Jan.

Beejo di qabr and the nearby historical site of Wazir Bagh such as the Durrani graveyard could be turned into a tourist attractions if efforts are made to preserve and renovate these sites.