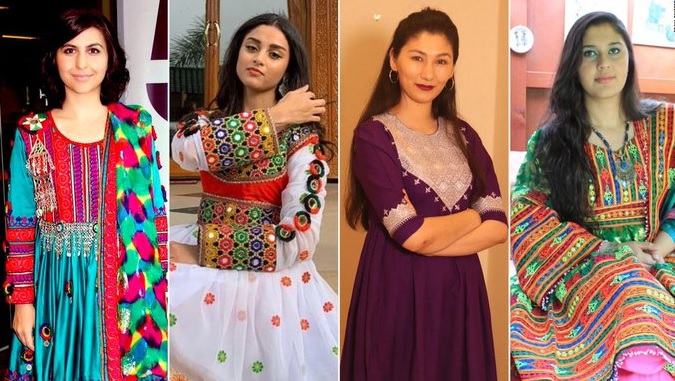 Rejecting the head-to-toe black robes Afghan women said that it an Arabic dress as Pashtun culture is not black or white but diverse and colorful.

Twitter users said that the Afghan culture is full of colours, and Ranjha, bangles, pizars, scarves and colorful dresses are the adornment of women, not these thick black burqas of Taliban women. “I am wearing the traditional Afghan attire. This is Afghan culture. This is how Afghan women dress,” said Waslat Hasrat-Nazimi while posting her photo in Afghan traditional dress. However, in response a twitter user said that Afghans have kept this attire only for special cultural ceremonies now.

Posting her photo in traditional Afghan attire, another Twitter user Paymana Assad wrote, “This is Afghan culture. My traditional dress. Our cultural attire is not the outfits the Taliban women were wearing.” In response, Assad received hundreds of comments praising the Pashtun culture. One twitter user wrote, “This shows that there is a beautiful country with beautiful people waiting to emerge and bless the world with their beautiful souls if only the colonisation by the Taliban can end.”Another user said that the world must support Afghan women and girls.

Journalist Sana Safi also posted her photo in an Afghan dress in response to Paymana Assad’s post and said, “This is how Afghan women dress. If I was in Afghanistan then I would have the scarf on my head. This is as “conservative” and “traditional” as I/you can get.”

The campaign was launched by Dr. Bahar Jalali, a Kabul based historian, just days after hundreds of veiled women at Kabul University rallied in support of the Taliban’s gender policy. Hundreds of Twitter users, who introduced themselves as Afghan women, participated in Dr Jalali’s campaign and shared photos in traditional attires. Non-Afghan users also took part in the campaign through various photos and calls for the protection of Pashtun culture.

Another Afghan woman Sodaba Haidare shared her picture on Twitter saying, “This is what an afghan woman looks like. This is our culture. This is our traditional dress. We love lots of colour. Even our rice is colourful and so is our flag.” Zulqarnain Shinwari, a twitter user said that Afghanistan has the most Islamic and most beautiful culture in the world. We don’t need any other dress codes to be imposed on us. We have everything of our own.

Rejecting the head-to-toe black robes Afghan women said that it is an Arabic dress as Pashtun culture is not black or white but diverse and colorful.  Journalist Malalai Bashir also posted her painting saying, “I paint Afghan women in traditional clothes to show the world our beautiful culture.”

The Taliban have announced an interim government after taking control of Kabul in the middle of August. They have also announced a general amnesty for their rivals and policies for various walks of life. Their government’s policies relating women have been protested by women activists in different parts of the country. Afghan women has also strongly criticised the Taliban on social media, urging to respect the local culture and women rights.