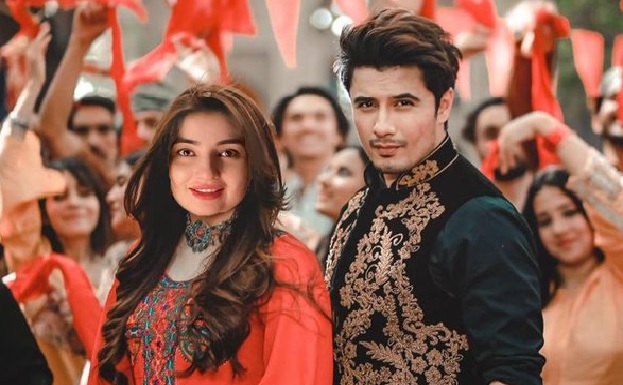 PESHAWAR: Famous Pakistani singers Ali Zafar and Gul Panra are all set to release a Pashto song on Pashtun Culture Day [23 September]. Though both the signers have dropped the teaser but the name of the song has not been revealed yet.

Ali Zafar, who released the teaser on Twitter and Instagram, wrote, “Yo Lo! TEASER ka maza lo!” In the teaser, Ali Zafar can be seen holding a handkerchief and performing the traditional ‘Khattak dance’ on a Pashto tune. He informed that the director of the music video is Waleed Akram and it would be released tomorrow, September 22, on the occasion of Pashtun Culture Day.

A look into Pashtun’s tribal and ethnic jewellery

‘In Peshawar, there’s nothing more beloved than chapli kabab’

Pashto songstress Gul Panra also shared the teaser on Instagram and wrote, “Here is the teaser of the most awaited song, Its Pashto on fire and spreading around the globe. By Your favourites Ali zafar and Gul Panra. “

Earlier, Ali Zafar had shared a glimpse of the electrifying Pashto song on the social networking site Twitter and asked the fans, “Whoever guesses the name of the song and the singer joining me for the Pashto song first, gets a special mention.” Zafar said that he would write the name of the singer and the song in his tweet. Though Gul Panra’s face was unclear in the photo, but a large number of users guessed that it was famous Pashto singer. The singer’s recent tweet also informed that the song includes him and Gul Panra as well as the musical band ‘Fortitude Pukhtoon Core’.

The singer has earlier said that after Sindhi and Baloch songs, he will also produce a song for Pashtuns that will be released on international Pashtun culture day. However, Pashtun twitter users had advised the artists that there are some amazing Pashtun artists who should be promoted instead of experiments on Pashto music.  One of the users wrote, “Pashto is not just a language. It is our code of life, don’t you dare experimenting here.”