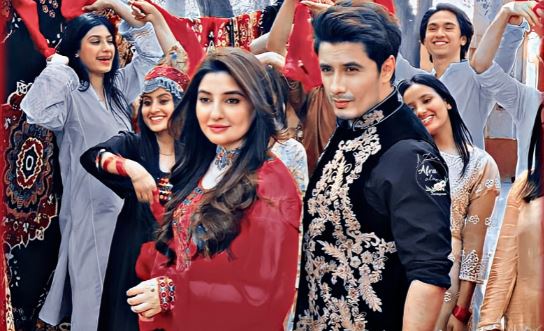 The song was released at a time when Pashtuns are celebrating their cultural day on 23 September.

The song is produced by Ali Zafar himself and directed by Waleed Alam. Apart from Gul Panra, Shahkar Alam Khan also performed in the electrifying Pashto track.

The video showcases Khyber Pakhtunkhwa’s tourist attractions, as well as Pashtun cultural dresses and other traditions. Besides Ali Zafar’s performance and Gul Panra’s traditional dance and the scenes shown in the video are being appreciated. The song was released at a time when Pashtuns are celebrating their cultural day on 23 September every year.

‘Laar Sha Pekhawar ta’ is a Pashto folk song. The song was also performed by Humayun Khan in the 5th season of Coke Studio in 2012. Besides Humayun, the song has been given voice by almost every famous Pashto singer.

The singer has earlier said that after Sindhi and Baloch songs, he will also produce a song for Pashtuns that will be released on international Pashtun culture day. However, Pashtun twitter users had advised the artists that there are some amazing Pashtun artists who should be promoted instead of experiments on Pashto music. One of the users wrote, “Pashto is not just a language. It is our code of life, don’t you dare experimenting here.”

The Pashto song released on Wednesday is not Ali Zafar’s first attempt to sing in Pakistan’s regional languages. In a recent Instagram post about the song, Ali Zafar said, “After Sindhi and Balochi, now is the time to sing Pashto.” In October 2019 Ali Zafar has released Balochi cultural track Laila O Laila with famous Baloch singer Urooj Fatima. On November 26, 2020, he has released another cultural number in Sindh ‘Munja Mar Wara’ with Urooj and Abid Brohi.