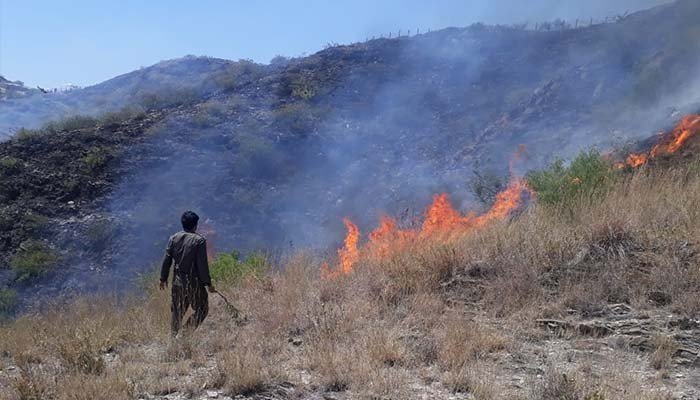 The Khyber Pakhtunkhwa (KP) assembly was informed that forest spread over the area of 815.69 acres was reduced to ashes in 58 different fire incidents in 2019-20.

PESHAWAR: The Khyber Pakhtunkhwa (KP) assembly was informed that forests spread over the area of 815.69 acres were reduced to ashes in 58 different fire incidents in 2019-20.

In response to the questions raised by the Jamaat-i-Islami (JI) Member Provincial Assembly from Bajaur Sirajuddin, the provincial forestry department said that 58 incidents were reported in 12 districts of the Khyber Pakhtunkhwa in 2019-20. But the opposition members said that the actual number of fire incidents was much more than provided by the ministry.

The opposition said that forest fire incidents have increased significantly in the last one year. Sources alleged the forest department officials are involved in putting forest on fire to cover up the alleged corruption in the Billion Tree Tsunami. “Most of the fires have taken place in the area where the trees were planted under the Billion Tree Tsunami,” one of the officials told on the condition of anonymity.

Minister for Labour and culture Shaukat Yousafzai said that forest fires are taking place all over the world. He said there have been fire incidents during the previous governments as well. The minister said that there are now more forests in the province than before. Speaker Mushtaq Ahmad Ghani appealed the people to refrain from putting grass on fire in forests.