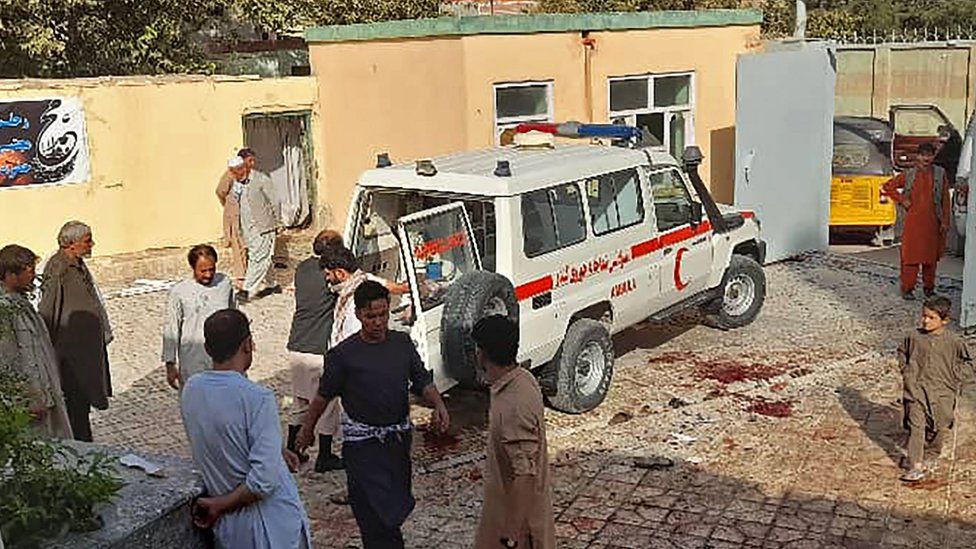 The Khurasan branch of the so-called Islamic State (ISIS) has claimed responsibility for the attack. ISIS says the target was the main Shiite Hazara mosque in Kunduz.

PESHAWAR: Local sources in northern Afghan province of Kunduz said that bomb blast at a mosque has killed 50 worshipers while over 100 were injured. A spokesman for the Kunduz governor, Matiullah Rohani, said the bomber struck shortly after Friday prayers.

Afghanistan’s private news chance ToloNews news reported that a “suicide bomber” targeted the mosque in Khanabad Bandar area of Kunduz province where about three hundred people were gathered for Friday prayer. The Afghan Human Rights Commission (AHRC) said Friday’s attack was “part of the ongoing killing of Shiites and Hazaras in the country”. The AHRC said that there was no credible security guard present outside the mosque to protect the community at risk.

A Taliban spokesman, Zabihullah Mujahid, confirmed the incident and said: “Special forces have arrived at the scene and are investigating the blast.” Mujahid said there were casualties in the incident, but did not give an exact number. The French news agency AFP quoted eyewitnesses as saying the blast occurred during Friday prayers. Afghan Interior Ministry spokesman Qari Syed Khosti confirmed the blast to AFP, but he also did not provide complete details of the incident.

The deputy head of the Ministry of Information and Culture Ahmadullah Wasiq told media that a shita mosque was targeted in Kunduz. Wasqi said, “A number of people were killed and wounded. Security forces have arrived and started investigation into the incident.”

No one has yet claimed responsibility for the attack, but the ISIS Khurasan group has recently claimed responsibility for such attacks in parts of Afghanistan. Earlier on Sunday, a bomb blast near the entrance to the Eidgah mosque in Kabul, killed several people. The Taliban interior ministry spokesman Qari Saeed Khosti told the media that three suspects had been arrested in connection with the incident.

The United Nations Office in Afghanistan (UNAMA) said on Twitter that the number of people killed in today’s attack on the mosque was high. UNAMA said this is third deadly is an attack on religious institutions since the Taliban takeover.