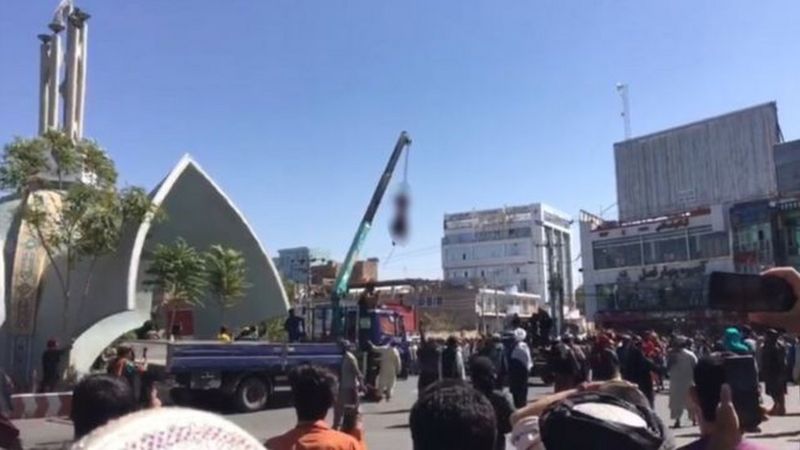 Zabihullah Mujahid wrote on Twitter that the Taliban shura has decided that until the court orders, the punishment of the offender in public should be avoided.

PESHAWAR: The Afghan Taliban ordered their local officials and fighters to refrain from public punishments without a court order.

The Spokesman of Islamic Emirate of Afghanistan, Zabihullah Mujahid wrote on Twitter that the Taliban shura has decided that until the court orders, the punishment of the offender in public should be avoided. He said that the punishment should be awarded in such a way that people are made aware of the crimes and its punishments.

Taliban to bring back cutting off hands as punishment

Last September, the Taliban hinged the bodies of four men accused of “kidnapping” in Herat’s central square. Afghan media quoted local Taliban officials in Herat as saying that the men were first killed in a clash with the Taliban and then their dead bodies were hanged in the square to create fear and warned people against committing crimes.

Last month, Mullah Nooruddin Turabi, the Taliban’s former head of prisons, had told the Associated Press that harsh punishments, such as public executions and mutilation, are “necessary to maintain security.” Turabi added that the Taliban cabinet was discussing the implementation of such punishments in public and would “formulate a policy” in this regard.

Turabi, said that the group will enforce severe punishments including hand imputation and execution ‘according to Islamic law.’ Turabi was the leader of “propagation of virtue and the prevention of vice” under the previous Taliban regime from 1996 to 2001 and enforced some of very strict Islamic laws. He is of the view that those laws are still enforceable. Turabi said that now there would be judges, including women judges, and cases would be heard, but the basis of Afghan law would be the Qur’an, and punishments would be granted accordingly.

Mujahid said in another Twitter post that the shura has imposed strict ban on deforestation. Mujahid added that the Taliban’s shura has ordered that “serious attention should be paid to the security of traders, money changers, oil and gas facilities and other related equipment.”