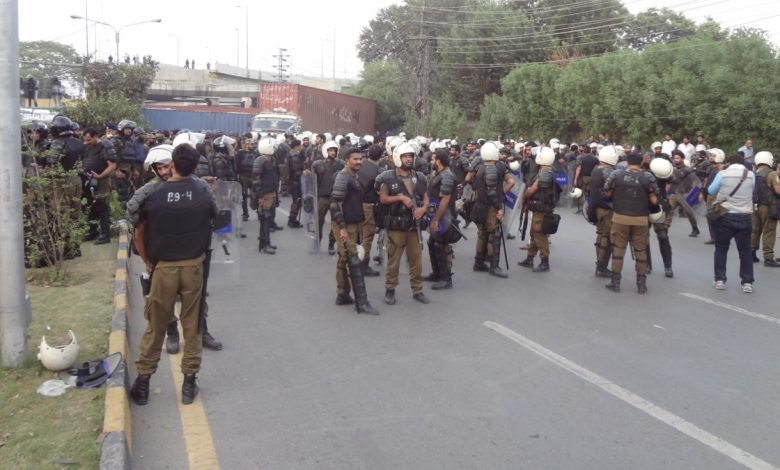 The banned TLP protest ‘long march’ resumed from Lahore to Islamabad on Saturday morning however a heavy contingent of police stopped them near Kala Shah Kaku.

PESHAWAR: The banned TLP protest ‘long march’ resumed from Lahore on Saturday morning but a heavy contingent of police stopped them near Kala Shah Kaku.

The marchers are currently out of Lahore but near Kala Shah Kaku, they are facing heavy tear gas shelling to stop their advance. Meanwhile, the Federal Interior Minister Sheikh Rashid has returned from UAE and reached Lahore for talks with the TLP leadership. He is accompanied by Federal Minister for Kashmir and Gilgit-Baltistan Ali Amin Gandapur.

Media has reported that an important meeting was held in Lahore under the chairmanship of Interior Minister Sheikh Rashid to discuss the TLP protest. The meeting is expected to take important decisions regarding the protest march to Islamabad. Federal Minister for Religious Affairs Noorul Haq Qadri, Federal Minister Ali Amin Gandapur and Provincial Law Minister Raja Basharat, Inspector General of Punjab police were also attended the meeting.

Earlier, after spending the night in Azadi Chowk, on Saturday morning, when the workers started their protest march, the police fired heavey tear gas. The administration also closed the area around the chowk with containers. The officials vowed that the marchers would not be allowed leave Lahore’s boundaries.

Meanwhile, the Faizabad area at the confluence of the federal capital Islamabad and Rawalpindi is completely sealed with containers. Barriers have also been set up on Murree Road and Rawalpindi’s main highway.