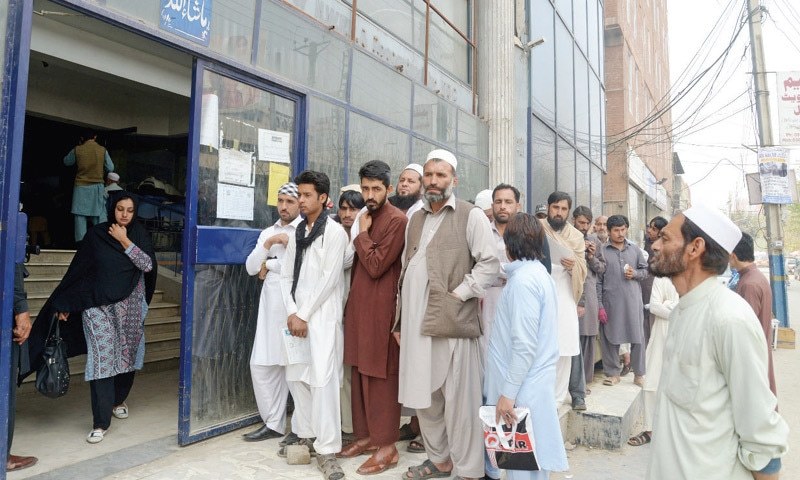 A recent study conducted by the United Nations Development Program (UNDP) and the Khyber Pakhtunkhwa government finds that financial services in seven tribal district is one of the lowest in Pakistan as there are a total of 81 bank branches across the seven districts.

PESHAWAR: A recent study conducted by the United Nations Development Program (UNDP) and the Khyber Pakhtunkhwa government finds that financial services in seven tribal district is one of the lowest in Pakistan as there are a total of 81 bank branches across the seven districts.

The detailed analytical report called ‘Access to Finance for Private Sector Development in the Merged Areas,’ finds that that total branches in the tribal region amounting to less than 5% of all branches in Khyber Pakhtunkhwa.

As of December 2020, the total individual loans in merged districts [Rs594 million] were more than twice as much as private sector loans (Rs219 million). Business owners tend to rely primarily on personal savings and individual loans from friends and families to fund their businesses.

Agricultural credit is also restricted and largely concentrated in districts of Kurram and Bajaur. The total outstanding agricultural loans in merged districts account for less than 1% of the total disbursement in KP.

The MAGP Senior Sector Specialist for Small Enterprises Ahmad Umair recommended expanding existing loan schemes by the government such as Kamyab Jawan and Insaf Rozgar. “There is a need to review criteria and relax minimum educational standards for credit services for youth of the merged areas,” he said, adding that the youth couldn’t complete their education during the years 2002 and 2015 as instability and security turmoil rocked the region. “Lack of education is acting as a major impediment in their entrepreneurial journey.”

MAGP Programme Manager Raluca Eddon reiterated UNDP’s commitment in supporting the KP Government in continued integration and development of the MA. She called for an active involvement of all stakeholders, including the government, development partners and the private sector to support the banking sector in ensuring widespread access to finance, especially for women and vulnerable groups. “By increasing reach of existing loan schemes and microfinance, introducing targeted financial products, and facilitating access to credit information, we can propel the development of a conducive business environment and help local businesses grow.”

In his closing remarks, the Secretary industry KP, Humayun Khan highlighted the need to partner with other stakeholders such as the State Bank, the Securities and Exchange Commission and other financial institutions to foster increased access to financing and regulatory support to local businesses. He said, “The findings of this report are highly beneficial to develop private sector in the tribal belt. Post-merger, we devised a ten-year-long Tribal Decade Strategy and set aside the first three years to focus on various interventions. In the coming seven years, we aim to concentrate on improving access to finance and bank lending in the region.”