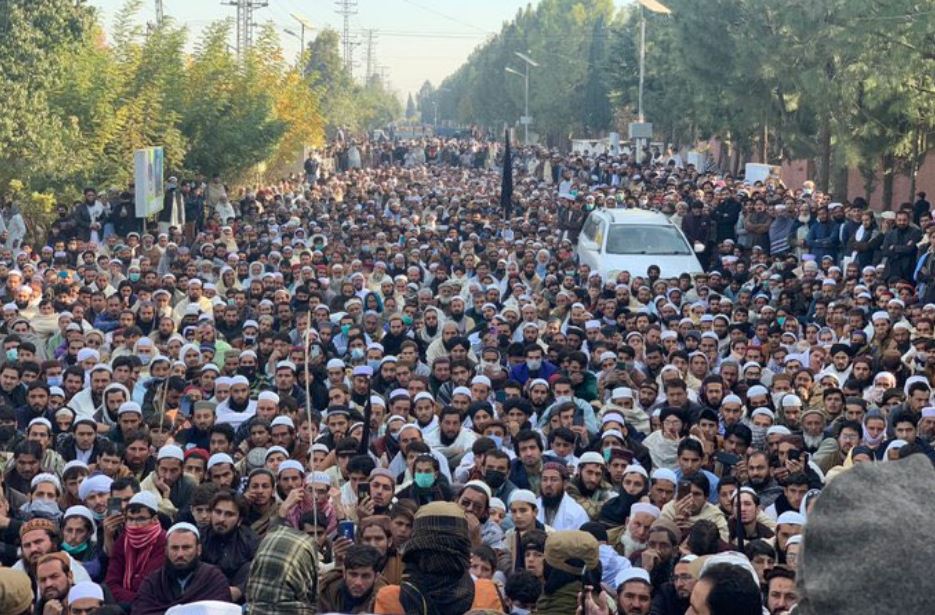 PESHAWAR: The Bajaur residents and activists of Jamiat Ulema-e-Islam- Fazl (JUI-F) on Tuesday ended sit-in and shutter down strike after the Khyber Pakhtunkhwa government assured to arrest killers of Qari Muhammad Ilyas within 10 days.

The district administration announced that negotiations with protesters were successful after they were assured that the killers would be arrested within 10 days and a case under the Terrorism Act will registered. The KP government also announced martyrs package for the bereaved family.

Former Governor Shaukatullah Khan, the police and Bajaur district administration officials held dialogues with the sit-in participants. Local journalists reported that the Civil Colony in Khar was closed and there was almost no attendance at government offices. Bajaur Bar also boycotted courts and no lawyer will appear in the district court on 23 November.

A local politician of JUI-F Qari Ilyas was shot killed by unknown persons in Khar, Bajaur on 22 November. He was the Amir of Jamiat Ulema-e-Islam’s Tehsil Mamond in Bajaur The police said that he was the JUI-F candidate for the upcoming local government elections. The workers of the JUI-F placed his dead body on the road in Khar city and accused the government of failure to provide protection. His elder brother Mufti Sultan Muhammad, a former member of KP assembly, was also killed two years ago. The protesters lamented that the police yet to arrest the killers despite the passage of two years.

#JusticeForQariIlyas remained top trend on social media site, Twitter, where more than 50,000 people raised voices against the murder of Qari Ilyas. Twitter users also posted photos and videos of Qari Ilyas’s children and his exhausted with grieved father. Twitter user said that if the accused in the murder of Qari Ilyas’s elder brother had been caught two years ago, this incident would not have taken place. They said, the administration has failed to arrest the killers of both the brothers.

The social media users criticised the mainstream media for not giving due coverage to the two days protest against the murder of Qari Ilyas. “There is a protest going on in Khar, Bajaur against the killing of Qari Ilyas. The mainstream is yet to take notice. The wave of target killings, violence and attacks continues to spread throughout Pakhtunkhwa. The state stands as the killings continue,” wrote Mohsin Dawar, the member of national assembly from North Waziristan.

Social activist Jibran Nasir wrote, “In severe cold 1000s of locals have gathered on streets of #Bajaur demanding #JusticeForQariIlyas. Qari Ilyas a JUI leader was reportedly shot dead by unknown assailants outside his college where he was giving his MA Exams. 2 yrs ago his elder brother Mufti Sultan was martyred.”