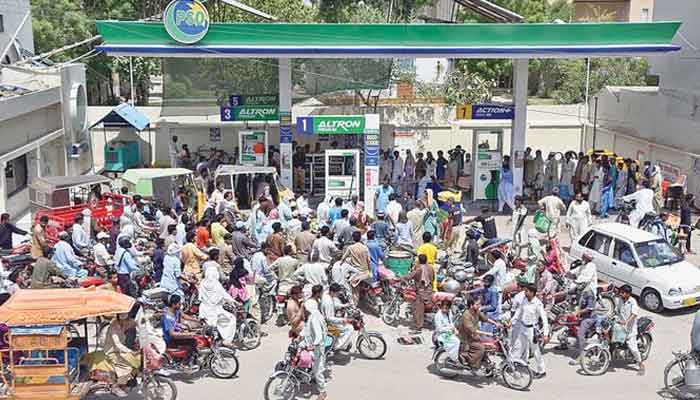 Like other parts of the country, Petrol pumps were closed in Khyber Pakhtunkhwa (KP), demanding the government to increase their ‘profit margin’.

PESHAWAR: Like other parts of the country, petroleum dealers association has closed pumps in Khyber Pakhtunkhwa (KP), demanding the government to increase their ‘profit margin’.

According to the officials of Pakistan Petroleum Dealers Association (PPDA) in KP, the current profit margin is Rs3.9 liter on petrol and Rs2.74 per liter on diesel, which the association is demanding to increase. The association said that the government has assured to increase it 6% but failed to implement the commitment.

Chairman of petroleum dealers association, Khyber Pakhtunkhwa, Abdul Majid told Mashriq TV that the association has held several rounds of talks with the federal ministers after that they accepted the demand. He said the government has now backtracked from the commitment. He lamented that different new taxes have been imposed on petrol pumps and electricity price-hike have made it difficult for petrol pumps owners to continue their business.

Majid said that the employees’ salaries have been increased to Rs21, 000 on the direction of the KP government. He said that they are facing huge losses due to which the petrol pumps owners are unable to continue serving the people. He assured that the strike will remain peaceful.

Citizens are facing severe problems due to closure of petrol pumps and asked the government to settle the issues and open the pumps so that the problems of the citizens can be reduced. The Pakistan State Oil (PSO) and Shell Pumps have not joined the protest. However, PSO and Shell petrol pumps are also partially closed in the province.

Federal minister for Energy Hamad Azhar said that the “illegitimate” demands of the pump owners will not be accepted. In a statement, Azhar said, “under the guise of strike at petrol pumps, some groups want an increase of their per liter profit to Rs9 that will put more burden on the masses.”