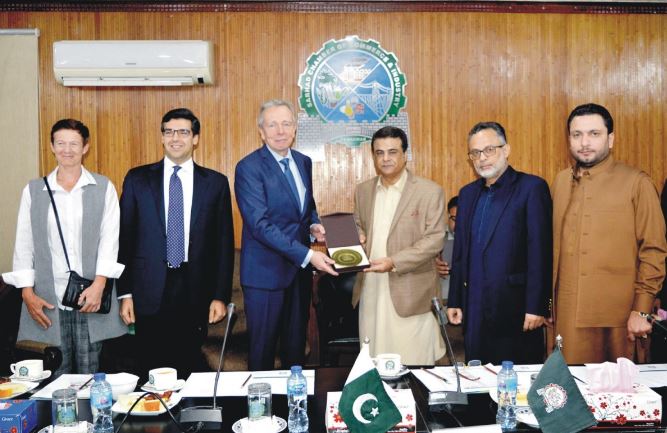 Ambassador of the Republic of Czech to Pakistan, Tomas Smetanka has said his country is keen to further strengthen trade and economic relations with Pakistan.

PESHAWAR: Ambassador of Czech republic to Pakistan, Tomas Smetanka has said his country is keen to further strengthen trade and economic relations with Pakistan.

However, he asked the Pakistan investors to take full benefits from Generalized Preferences Scheme-Plus (GPS+) status – granting a duty-free access to Pakistani manufacturing products to the EU market and make investment in potential sectors in Czech Republic. He said it will help further strengthen mutual cooperation in multi-facet sectors as well as economic and trade relations.

Smetanka was addressing members of the business community during a meeting, chaired by President Sarhad Chamber of Commerce and Industry (SCCI) Hasnain Khurshid Ahmad here at the chamber house on Thursday. Khurhsid while stressing the need of bolstering trade and economic ties between Pakistan and Republic of Czech said that the trade volume between the two countries would be further enhanced by ripping the benefits of GSP+status.

Barrister Asad Saifullah Khan, Honorary Consul General (CG) of Republic of  Czech in Peshawar and Deputy Head to Honorary Consul General, Malik Riaz Ahmad Awan, Ifikhar Khan, others also present in the meeting. There is huge potential to boost up mutual trade and economic relations between Pakistan and the Republic of Czech, which should be exploited effectively and efficiently, says Hasnain Khurshid.

He invited the Republic of Czech investors to make investment in potential sectors in Khyber Pakhtunkhwa, including tourism/hospitality, hydel power generation, oil, gas, mine and mineral, gemstones, honey, pharma etc. He hoped that it can help to further improve the mutual trade and economic relations between the two countries.

Tomas Smetanka said that his country is making vigorous efforts to further improve bilateral trade and economic ties with Pakistan. He said Pakistan had granted GPS+ status, through which Pakistanis exporters, mostly textile, leather sector, are taking full benefits from this special scheme. However, he emphasized that Khyber Pakhtunkhwa businessmen should take advantage of this golden opportunity of GPS+ scheme and make investment in potential sectors of the Republic of Czech..

On the occasion, the diplomat said that sometimes the mutual trade volume between the Republic of Czech and Pakistan improved or sometimes witnessed declining since the outbreak of the global coronavirus pandemic and some other reasons. However, he expressed hope that the bilateral trade and economic relations between the countries would be further enhanced through mutual cooperation and efforts in future.