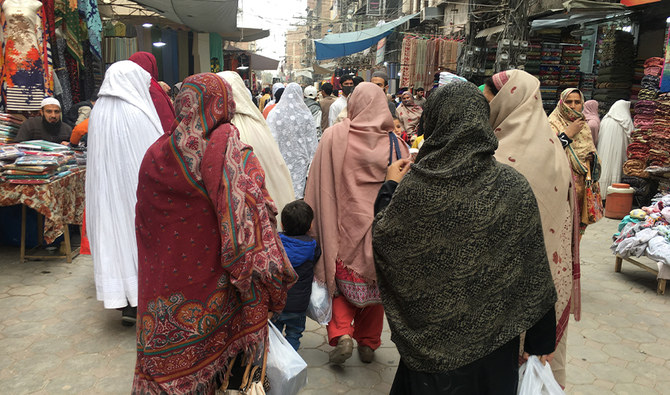 The traders association termed ‘designed beards’ un-Islamic and vowed that it will not be allowed in Khal.

PESHAWAR: The Khal Bazaar’s Traders Association and tribal elders in Upper Dir have barred women from visiting the market for shopping without a male relative.

The traders association also termed ‘designed beards’ un-Islamic and vowed that it will not be allowed in Khal. The decisions were made during a meeting of traders in Khal bazaar on 25 November.

The meeting was chaired by the association President Akhunzada Hamidur Rehman. Haji Shah Zarin, Akhunzada Tilawat Shah, Akhunzada Fazil Syed, Akhunzada Kalimullah, Alam Khan Roghani and dozens of other traders participated in the meeting. It was the first meeting of the Khar Bazar traders association’s cabinet which was restored with the efforts of tribal elders.

“We have decided that the women visiting the market without male relative will not be allowed to entire our shops,” the traders said as quoted by Daily Mashriq. “The decision will be propagated through loudspeakers and local tribal elders.”

The traders association also strongly condemned ‘designed beards’ and asked barbers to avoid the practice as it un-Islamic. “The beard is the Sunnah [tradition] prophet Muhammad [peace be upon him], thus, we will not allow anyone to make designs out of it.”

In February, this year, The Mamund Qaumi Jirga in Bajaur barred them from making calls to FM radio stations and warned that if any woman violated the order a fine of Rs10000 will be imposed on her family, foreign media reported on Saturday. A video was posted on social media in which a local leader, Syed Rahman, told the Jirga that it was a “common decision of the entire tribe” that women will not visit women-related government facilities and will not make calls to radio stations.

However, the local population had rejected the decision of the jirga, saying Mamund Qaumi Jirga does not represent the entire population of Bajaur district.