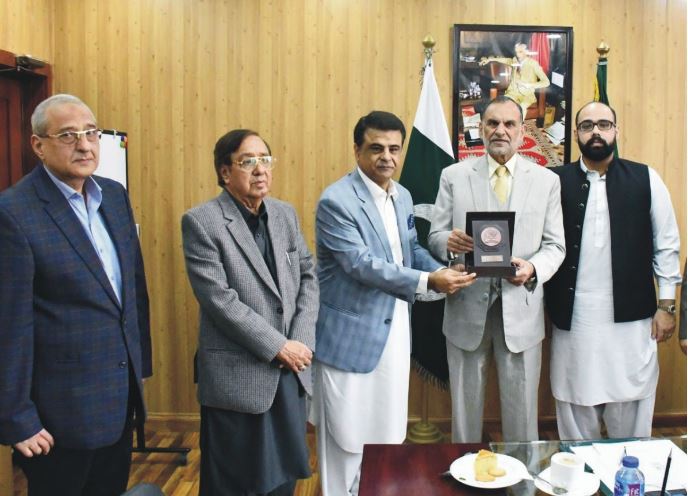 PESHAWAR: The Ministry of Railways (MoR) and Sarhad Chamber of Commerce and Industry (SCCI) on Monday agreed to fully operational the Azakhel dry port to facilitate Pak-Afghan Transit trade, onward to the Central Asian Republic as well as boost up exports.

The agreement was reached during a meeting between Federal Minister for Railways, Azam Khan Swati and delegation of SCCI, led by its President Hasnain Khurshid Ahamd, in Islamabad.During the meeting, the SCCI president presented a five point agenda proposed by the chamber regarding facilitating Pak-Afghan transit trade through Azakhel dry port. The Federal Minister Azam agreed with the proposals and appreciated the SCCI for presenting modalities to make fully operational the Azakhel Dry-port.

“The minister, on occasion, issued directives to implement the proposals of SCCI at earliest to fully develop Azakhel dry-port ,” said the statement issued by SCCI after the meeting. The chamber delegation thanked the minister for issuing instructions for immediate execution of recommendations, which was highly commendable and appreciable. Hasnain Khurshid while speaking on the occasion said FBR is willing to allow cross stuffing of transit goods at Karachi port and Azakhel port but needs the consent of federal Government/Ministry of Railways as from the Azakhel dry port transit goods will be loaded in single truck bonded carriers [which has been made procedural recently. However, he said the system couldn’t be implemented as the Azakhel dry port is not fully operational.

Similarly, he said the Pakistan Railways will earn enormous revenue if the Azakhel dry port could be fully operationalized, besides, it can also generate employment opportunities. The SCCI chief informed that KP is exporting items like furniture, mineral, marbles, matches and honey, etc but the exporters were facing lots of problems owing to unavailability of bonded carriers’ facility in Peshawar to carry these exports goods to Karachi port for onward destinations. He added this practice also damages most of the consignments at the Karachi port.

Mr Khurshid said the Azakhel dry port event after its completion hadn’t been fully operationalized as inaugurated by Prime Minister Imran Khan in January last year, but it still lacked the basic facilities, consequentially, exporters were faced with enormous problems. He viewed that the fully functioning Azakhel dry port will help to facilitate Pak-Afghan Transit trade and onward to Central Asian Republics.