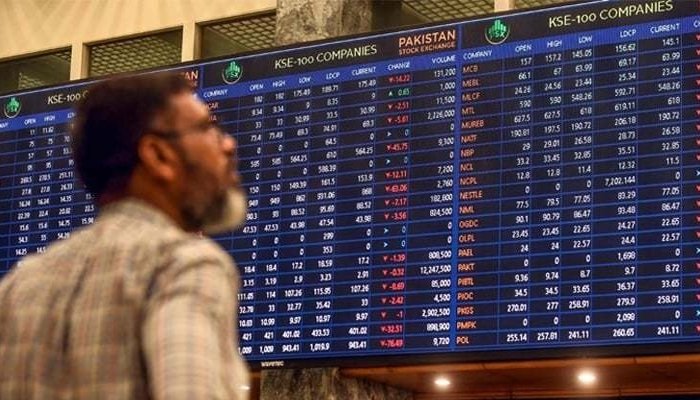 The market declined by 4.7% over the previous day.

According to Ismail Iqbal securities, it is the fourth highest fall in single day. The market declined by 4.7% over the previous day.

Experts say one of the reasons for major plunge was the data released on Wednesday which showed that Pakistan’s trade deficit had increased by $5.1 billion in November, Inflation touched 11.5%, Imports touched all time high and bond’s jumped to 11.5% for 6 months, signaling that interest rate will increase sharply. The report shows that trade deficit for five months increased by $20.75 billion for five months. In addition, the treasury bill was auctioned on 1 December, raising its rate to 1.5% , which is expected to raise interest rates by 1.5% in the next agricultural policy on 15 November.

Social media users are expressing concern over the sharp decline in the stock exchange and criticizing the government. Opposition leader and Pakistan Muslim League-Nawaz president Shahbaz Sharif said in a tweet that “the fall of 2000 points on the stock exchange shows the “lack of confidence” of investors in PTI’s economic policies.

Former Governor of Sindh and PML-N senior leader Muhammad Zubair wrote in a Twitter post, “Stock market down by over 2000 points in a single day. Breaking all records. Panic selling by foreign as well as domestic investors. Someone at the highest level needs to calm the nerves – Finance Minister or perhaps PM ?.”  Zubair added that this is a direct result of recent terrible financial disasters including T-bill auction at 11.5%, high inflation (SPI 18%) & record trade deficit of $21 billion.

On 1 December, the market increased by 296 points to close at KSE-100 at 45,369 with volume traded at 85.03 million shares. The cement and banking sector had showed strength and contributed around 200 points to the index. Major volume leaders remain the retail picks which were FFL, FFLR1, TPLP, MLCF and TRG with cumulative volume traded of around 109 million shares. However, the PSX could not maintain the momentum.

The new variant of corona-virus, Omicron, which has led to a drop in commodity prices in the world market, has also played a major role bloodbath as stock exchange. Amin Yousuf, the chief executive officer of AKD Securities, said that markets around the world are on declined due to fears of a new variant of coronavirus. Yousuf said that it has also led decline in global crude oil prices. He said that the SBP’s increase of 125 basis points in interest rates in T-Bills auction is also adding to the difficulties of investors while the policy coming up on 14 December is likely to raise interest rates further. For all these reasons, The PSX is under selling pressure.