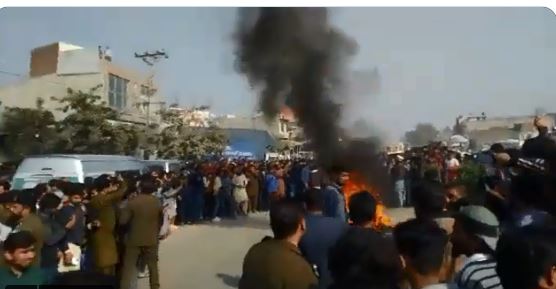 According to officials in Sialkot, factory workers have tortured a non-Muslim foreign manager of a factory to death and set his body on fire on blasphemy allegations.

PESHAWAR: According to officials in Sialkot, factory workers have tortured a non-Muslim manager of a factory to death and set his body on fire over blasphemy allegations.

Footage shared on social media on Friday shows the burning body of a man surrounded by a large number of people. An official of the city administration told the media that a foreign manager was killed for blasphemy and his body was set on fire.

The District Police Officer (DPO) Sialkot Umar Saeed Malik told the media that upon receiving the information, a heavy contingent of police reached the spot and tried to control the situation. The DPO said that the employees also vandalized the factory located on Wazirabad Road and blocked the road. According to DPO, after talks, the protesters opened Wazirabad road for traffic. He said investigation into the death of the foreign national is under way.

Punjab Chief Minister Usman Bazdar has taken notice of the incident and demanded a report from Inspector General of Police. In a statement, Bazdar said that every aspect of the incident should be investigated and a detailed report should be submitted. “Those who take the law into their own hands will be prosecuted under the law. The Chief Minister Buzdar said that no one can be allowed to take the law into his own hands and legal action will be taken against all those involved in the incident.

The Inspector General Police (IGP) of Punjab Police Rao Sikandar Ali Khan also took notice of the incident and directed regional police officer to reach to the crime spot. The IG said that DPO Sialkot was present at the spot and all aspects of the incident are being investigated.