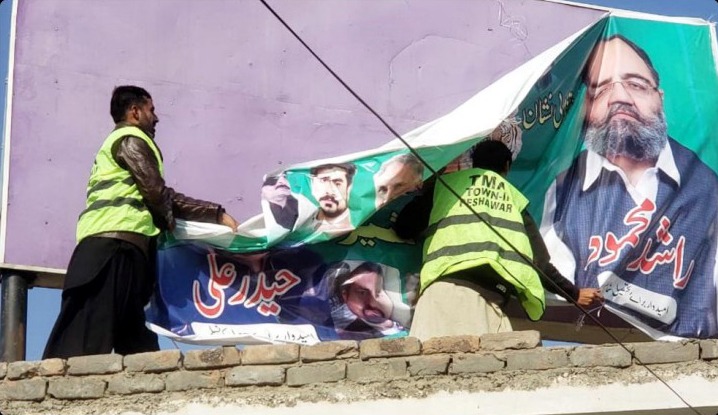 The Local Government elections are scheduled in 17 districts of Khyber Pakhtunkhwa (KP) on party lines on 19 December.

PESHAWAR: The Local Government elections candidates have been openly violating the election code of conduct by posters, banners and hoardings larger than sizes specified by the Election Commission of Pakistan but the authorities have adopted complete silence.

The Local Government elections are scheduled in 17 districts of Khyber Pakhtunkhwa (KP) on party lines on 19 December. The candidates will continue their election campaign till midnight of 17th December. The streets, roads, intersections and walls of all 17 districts including DI Khan, Kohat, Bannu and DI Khan are a buzzing with banners and posters, violating the election code of conduct.

According to the code of conduct of the Election Commission, Tehsil and city local government chairman or mayor candidates are allowed 8×23 inch size Posters, 9×6 size pamphlets or leaflets, 3×9 feet cloth Banners and 3×9 feet portraits. For village and neighborhood council elections, the poster size would be 18×23 inch while the size of banner will be 3×9 feet.

Candidates have been directed to abide by the code of conduct but this practice has been completely ignored throughout the province and the district administration or administration of is not taking any action. As a result, many buildings have been covered with giant banners and plaques and roadside giant board boards

Last month, the Awami National Party (AWP) Khyber Pakhtunkhwa President Aimal Wali Khan wrote a letter to the Chief Election Commissioner against the violation of election code of conduct but he targeted government ministers, chief minister and members of the ruling party in his letter to the election body. “The Chief Minister himself visiting constituencies and announcing fake development works,” the ANP leader said.

He alleged that the ruling party is using government resources to influence voters. The letter demanded that the Election Commission take stern action against the government representatives and ensure compliance of the Electoral Code of Conduct.

Meanwhile, the Pshawar’s town-2 administration said that more than 50 billboards and Penaflex larger than the prescribed size were removed while the candidates were issued warnings not to violate in future. During the operation, all the giant billboards and Penaflex were removed and confiscated, the officials said. According to the Town-2 administration, the operation was carried out in the light of instructions of Election Monitoring Officer Peshawar.