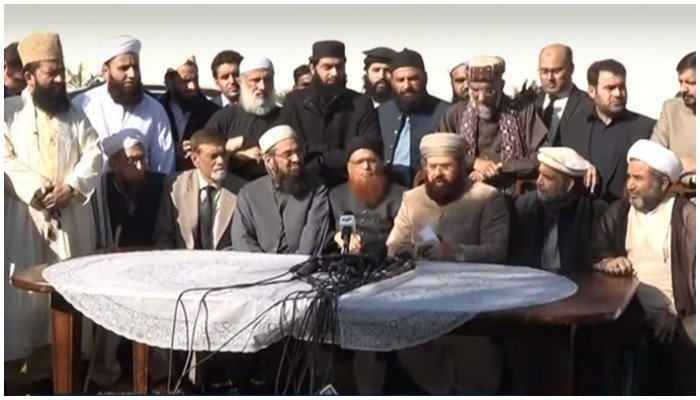 PESHAWAR: Religious Scholars of different schools of thought strongly condemned the Sialkot incident and offered condolences to the Sri Lankan government and people, and announced to observe Friday 10 December, “day of condemnation”.

Addressing the new conference outside the Sri Lankan high commission in Islamabad, Mufti Taqi Usmani and other scholars expressed grief over the Sialkot tragedy and said that all the accused involved in the incident would be punished. “We have come here to represent the entire nation. The Sialkot incident has shaken the entire nation. The incident has been condemned by all quarters, including religious scholars and the public,” Mufti Taqi Usman said.

Thanking the Sri Lankan High Commissioner, Mufti Taqi requested the government to provide compensation to the family of Sri Lankan national, lynched by a ‘vigilant mob’ on 3 December.

On the occasion, the Sri Lankan High Commissioner said that such an incident should not have taken place. He said that prosecution of criminals has started as PM Imran has assured that all the culprits will be brought to justice. He reiterated that this tragic incident will not affect the relations between the two countries.

Addressing a joint press conference, Sahibzada Hamid Raza said, “We do not have the words to condemn the tragedy. We have come here to express our condemnation to the people of Sri Lanka. It was a cruel move that no one will support and no one can justify it, we are ashamed of the incident. “

On this occasion, the head of the Federation of Arab Madrassas of Pakistan, Qari Hafeez Jalandhari, has announced the “day of condemnation” on Friday, December 10. On this day, the religious scholars will discuss the issue in all mosques and imambargahs. “We have assured in the meeting that the government of Pakistan will take every possible measures to punish the culprits,” Jalandhari said.

Head of the National Solidarity Council, Sahibzada Abul Khair Muhammad Zubair said that “Whoever kills an innocent person it is as if he has killed all of humanity.” He strongly condemned the Sialkot incident and reiterated that incident has nothing to do with Islam and constitution of Pakistan.

Allama Arif Wahidi, head of Shia Ulema Council of Pakistan, said that the delegation of Ulema represent the entire nation. “We have come to convey the message that the two countries will remain as they were before. We will maintain friendships and will further strengthen our relationships.”