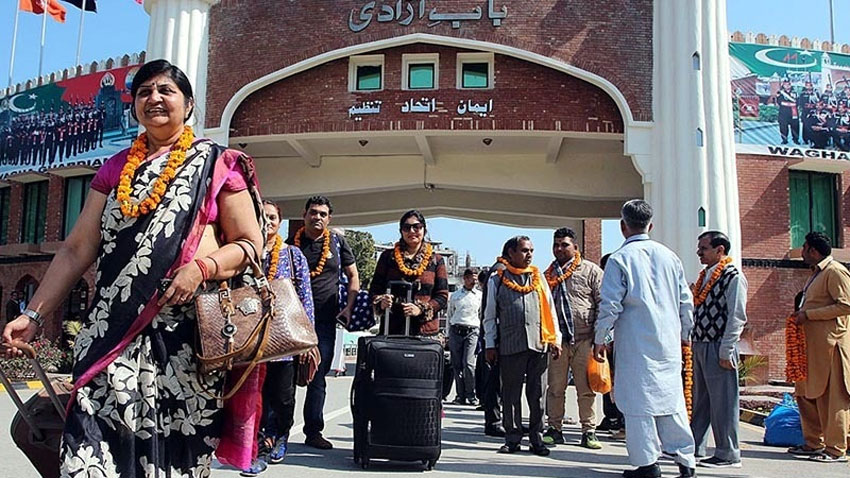 A delegation of 159 Indian Hindu pilgrims arrived in Lahore.

PESHAWAR: After the restoration of Shri Param Hans Ji Maharaj’s Samadhi in Karak, a procession of Hindu worshipers from India will start arriving in Khyber Pakhtunkhwa (KP) to visit the centuries-old temple.

Radio Pakistan has reported that a delegation of 159 Indian Hindu pilgrims arrived in Lahore via Wagah Border on Saturday. The initiative – considered important for the promotion of religious tourism – will allow millions of pilgrims from India to visit the sites of religious importance in the province.

The Pakistan Hindu Council also confirmed that more than 159 pilgrims from different countries, including India, have arrived in Pakistan on 1 January. Due to India’s refusal to allow Pakistan International Airlines, the delegation entered Pakistan via Wagah crossing point.

According to Dr. Ramesh Kumar Vankwani, Patron General of Pakistan Hindu Council and Member National Assembly, Pakistan Hindu Council has signed an important agreement with PIA, under which Hindu pilgrims from all over the world, including India, will be provided travel facilities to visit their holy sites in Pakistan.

From Lahore, the Indian pilgrims will be brought to Peshawar by special flight. Pakistan Hindu Council has also decided to cooperate with Air India for providing travel facilities to pilgrims. Vankwani further said that after January 20, Pakistan Hindu Council will take Pakistani citizens, including parliamentarians, on a four-day visit to Dargah Nizamuddin Auliya Delhi and Dargah Khawaja Gharib Nawaz Ajmer Sharif in India.

He informed that the Indian pilgrims will also visit other historical sites including Minar-e-Pakistan, Shahi Qala and Badshahi Masjid. Dr. Ramesh Vankwani added that next month in February, Air India flights will be operated from New Delhi to Peshawar and Karachi to provide travel facilities to the pilgrims in in KP and Balochistan. He hoped that the promotion of religious tourism will bring the people of the two countries closer to each other.