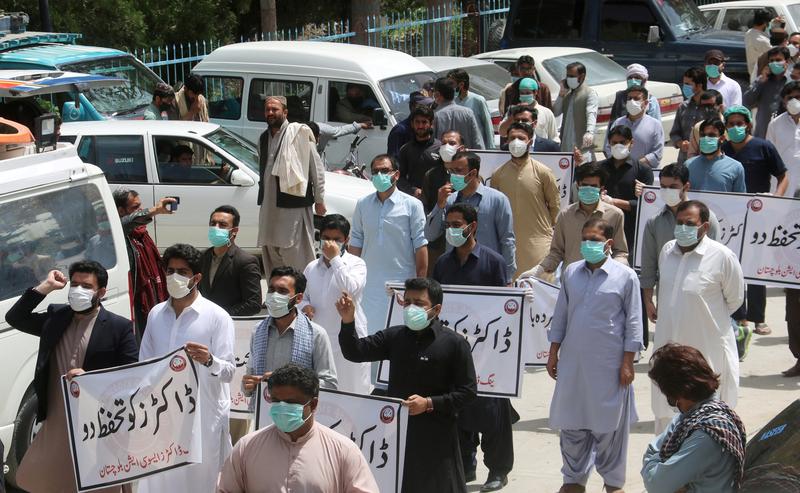 PESHAWAR: The Balochistan Young Doctors Association (YDA) on Wednesday said that several doctors were injured after the police cracked down doctors protesting in Quetta. The YDA said that doctors were also arrested to stop their rally from entering the red zone.

The YDA had announced protest outside the Chief Minister’s House in the Red Zone area, asking the government to stop the privitisation of government hospitals and provide facilities to health centers. However, the Balochistan government said that it accepts doctors’ demand and there is no plan to privatise hospitals.

A heavy contingent of police was deployed on the occasion of the Young Doctors’ Rally and the roads leading to the Red Zone were cordoned off with barbed wire. However, the young doctors were adamant to take the rally to the CM house. The Young Doctors Association and the Paramedical Staff Federation started the rally from Sandeman Provincial Hospital towards the red zone.

The rally was on the way to the Red Zone when the police tried to stop them, however, the protesters did listen to the police request. Thus, the police clamped down on the protests as a result several doctors were injured and number of them were arrested.  The police officials said that they have arrested 20 to 25 protesters and shifted them to concern police station for legal action.

Following the arrests, the young doctors and paramedics also boycotted the emergency services, leaving patients in critical condition. The patients demanded that the Balochistan government to taken notice and end the strike immediately so that the patients could get relief. The spokesperson of Young Doctors Association, Balochistan, Dr Rahim Khan said that 10 doctors were injured due to the baton charge while more than 50 have been arrested. Khan said that the injured have been shifted to the Trauma Center of Civil Hospital.

During the protest the Anscomb Road was closed and alternative routes were used throughout the day. The young doctors protesting in Quetta for the past three months over the alleged privatisation of hospitals and lack of modern facilities in government hospitals.