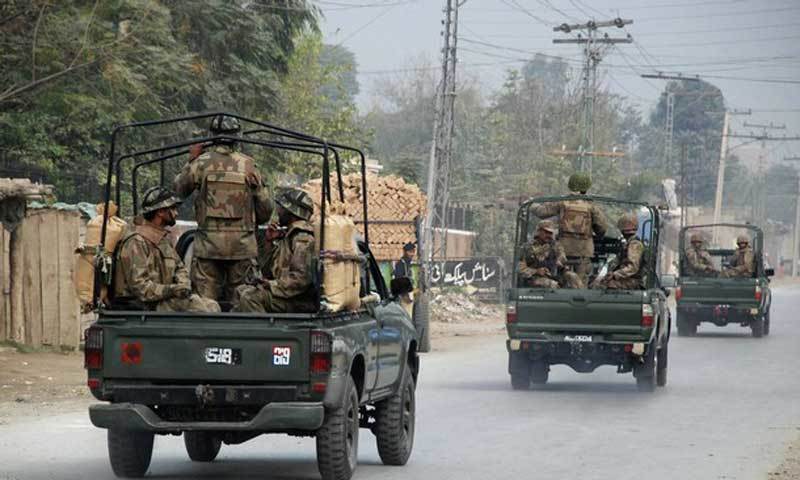 A soldiers was martyred after terrorists attacked a check point in the Jani Khel area of Bannu district.

PESHAWAR: A Pakistan soldier martyred in Bannu after terrorists attacked a check point in the Jani Khel area of Bannu district.

The Inter-Service Public Relations (ISPR) said that the terrorists attacked an army post at Jani Khel as a result a 26-year-old soldier called Sarfraz Ali was martyred. The ISPR said that soldier martyred in Bannu belongs to Punjab’s Vehari district. The attack was launched against the military post on January 14.

On the other hand, two ‘terrorists’ were arrested and one was killed during a security operation in Miranshah area of ​​North Waziristan tribal district. According to ISPR, the ‘terrorists’ were hiding in a house. The ISPR said that weapons were also recovered from their possession.

On January 7, the Counter Terrorism Department (CTD) killed two ‘terrorists’ in Bannu in an intelligence-based operation on Friday night. The CTD said that the ‘terrorists’ were associated with banned the hardline militant group Tehrik-i-Taliban Pakistan (TTP). According to spokesperson, the operation was carried out on the basis of verified information.

The spokesperson added that the terrorists opened fire on the security forces which was responded in befitting manner as a result two ‘terrorists’ were killed while other took advantage of the darkness and escaped. However, the CTD said that a search operation was underway for their arrest. The Khyber Pakhtunkhwa (KP) police said that during 2021, 90 percent of terrorist attacks in the province were operated by militant groups hiding in Afghanistan.

The Deputy Inspector General (DIG )of Counter Terrorism Department (CTD) Javed Iqbal Wazir, while briefing the media about the police performance in 2021, said that during 2021, 48 policemen were martyred while 44 injured in attacks and operations against terrorists. He informed that 599 high profile terrorists were apprehended and 110 were killed in police operations.