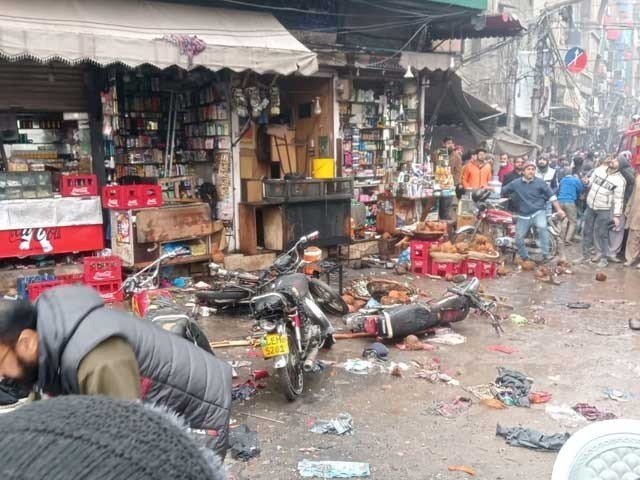 PESHAWAR: At least three people – including a child – were killed and 23 others were injured in bomb blast in Lahore, New Anarkali Bazaar, near the police recruiting center on Thursday.

The blast was so powerful that the windows of nearby buildings shattered and several parked motorcycles caught fire. It was initially termed a cylinder explosion, but was later reported to have been a bomb blast.

As soon as the incident was reported, rescue teams rushed to the spot while senior police officers were also present on the spot. Capital City Police Officer (CCPO) Fayyaz Ahmed has directed the police to assist in rescue operations. Security in Lahore has been placed on high alert. Deputy Inspector General of police Operations Dr Muhammad Abid Khan has ordered to increase security at the entrances and exit points of the city and tighten checking process at check posts.

According to rescue sources, 27 people were injured in the blast and have been shifted to Mayo Hospital where some of them were stated to be in critical condition. Confirming the deaths of three people, Deputy Commissioner Lahore said that the dead include a 12-year-old boy identified as Zeeshan. The deputy commissioner said the blast took place at 1:45 am and a bomb disposal squad and forensic teams was working to collect further detail.

Lahore Police said that the bomb was planted near the shops at the entrance of Anarkali Bazaar. DIG Operations Dr Abid confirmed the bomb blast in Lahore, saying 20 people have been injured in the explosion. Aid that a preliminary investigation has been started into the incident. The Medical Superintendent (MS) of Mayo Hospital declared emergency at the hospital and directed to provide best medical facilities to the injured. As soon as the blast was reported, Assistant Commissioner City Faizan Ahmed reached Mayo hospital on the instructions of Deputy Commissioner Lahore Omar Sher Chattha.

Punjab Chief Minister Usman Bazdar took notice of the incident and demanded a report from the Inspector General of Police. Expressing deep sorrow and regret over the loss of precious human lives, Buzdar said that those responsible for the blast must be brought to justice. The Chief Minister said that the incident was a vicious act to sabotage the law and order situation in the province. The Pakistan Muslim League-Nawaz vice-president Maryam Nawaz condemned the bomb blast in Lahore.

A police spokesman said that preliminary investigations into the blast suggested it was carried out through a planted device. He said the blast took place near shops in the area of Lohari Gate that has shattered shop windows and damaged several motorcycles and other vehicles. He said Police have cordoned off the area for further investigation.

The last few days, the terrorism-related incident in Pakistan has increased. This week, terrorists in Pakistan targeted policemen in different cities, including the capital Islamabad. The outlawed Tehreek-i-Taliban Pakistan (TTP) claimed responsibility for the attack on police personnel in Islamabad. Interior Minister Sheikh Rashid has said that the attack on police indicates that “there are terror hideouts in the capital city.”