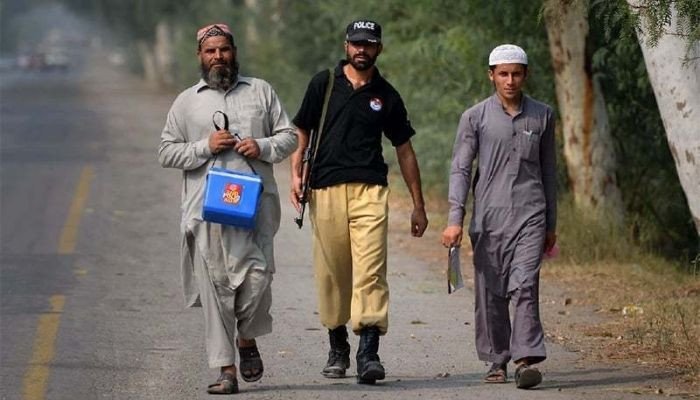 The Jumra police station said that Constable Hamid was guarding polio vaccination team when armed assailants opened fire as a result he died on the spot. The body of the martyred officer was shifted to KDA Hospital while a heavy contingent of police launched search operation. Police have sealed off the entrances and exits of the area and arrested several suspects.

Police: 90 per cent attacks in KP operated from Afghanistan

Funeral prayers of martyred police constable were offered at the police line which was attended by a large number of people including police, army and civil officers.  Deputy Inspector General of Police Tahir Ayub and the District Police Officer Muhammad Suleiman visited the crime sport and directed to further tighten the security of the polio teams.

On 11 December, a policeman was martyred while another sustained serious injuries in terrorists attack on security team guarding anti-polio vaccinators in Tank district’s Chaddarah area.  The banked Tehrik-e-Taliban Pakistan (TTP) has claimed responsibility for the attack.

Yesterday, the Khyber Pakhtunkhwa Chief Minister Special Assistant on Information Barrister Muhammad Ali Saif said over 3.4 million children will be vaccinated during the five polio vaccination program in the province. He urged parents and religious scholars to play an active role in creating conducive environment for polio vaccinators as the vaccine is only source of protecting children against the crippling disease.

The adviser said due to the government’s effective measures, no case has been reported from the province during the last two year. He hoped that the virus would be eradicated from the country soon.

Meanwhile the Deputy Commissioner of Charsadda district imposed section 144 of the Criminal Procedure Code (CrPC), directing the Afghan refugees to remain in the camps during the five-day polio vaccination drive. The deputy commissioner has banned public gatherings, rallies and protests, vehicles with tinted glass in the districts.