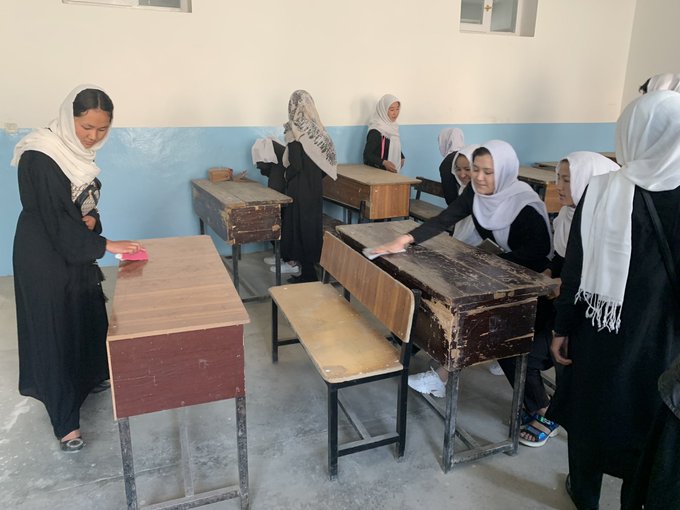 Taliban’s acting education minister has said that apart from economic constrains, one of reasons for girls’ school closures is co-education system

PESHAWAR: The Taliban government ordered closure of girls’ secondary schools hours after its reopening on Wednesday, sparking a wave of frustration among students while United Nations termed the move “disturbing.”

The Taliban spokesman Inamullah Samangani confirmed the move to the AFP without explaining the reason behind the sudden closure of schools. The Education Ministry spokesman Aziz Ahmed declined to provide any information, saying that he has been barred from discussing the issue. But, some Taliban officials said that schools will be opened soon after they make a plan according to Islamic law.

Palwasha, a teacher at Umra Khan Girls’ School told AFP that it was a painful movement to see students crying while leaving their schools. The schools were opened for the first time after the Taliban took control of Afghanistan since mid-August 2021. Deborah Lyons, the United Nations special envoy to Afghanistan, called the move “disturbing.”

When the Taliban took control of the country in August last year, schools were closed due to the Coronavirus pandemic, but two months later only boys were allowed to attend schools. The schools teachers were not paid by the Taliban and recently international organisation offered pay salaries to schools teachers. There were fears that the Taliban would ban girls’ education, as they did during their previous regime (1996 to 2001).

On Wednesday, schools were reopened in several districts, including Herat and Panjshir and the Taliban’s spiritual center in Kandahar. The Afghan education ministry said that they want to reopen all female education institutions but will not succumb to international pressure.

Abdul Baqi Haqqani, Taliban’s acting education minister has said that apart from economic constrains, one of the main reasons for female school closures is co-education system. He has said that the Taliban will arrange separate classes for girls and appoint additional female teachers, which require more time and financial resources.