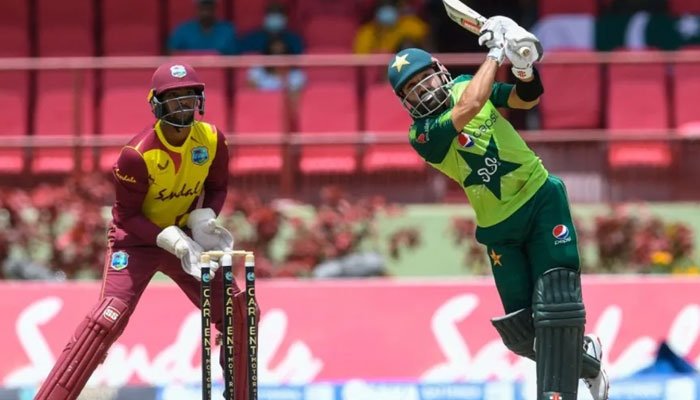 Share
Tweet
Share
Share
Email
Comments
LAHORE: In view of the prevailing sweltering heatwave in the country, the Pakistan Cricket Board (PCB) is planning to schedule the upcoming three-match One Day International (ODI) series between Pakistan and West Indies in the evening, said well-placed sources told Geo Super.
The three-match series between Pakistan and West Indies is scheduled to start on June 8, 2022.
The day and night matches usually start at 2pm in Pakistan, however, due to the extremely hot weather — which is expected to further intensify in June — PCB is considering starting matches in the evening at around 5 pm.
According to weather forecasting services, the temperatures could rise above 40°C in Rawalpindi and Multan in the first week of June.
This is not the first time when the PCB planned to start the ODI matches in the evening. In 2012, Pakistan hosted Australia in the UAE, where all three ODIs kicked off at 6pm (local time) and ended at 1:45am (local time).
PCB is also planning to take precautionary measures in order to save players from getting affected by the heatwave. As per the International Cricket Council (ICC) laws, there are two drink breaks allowed per session but umpires can also permit extra drink breaks due to extreme weather conditions.
Pakistan and West Indies are scheduled to play three-match ODI series in Rawalpindi on June 8, 10, and 12. However, the series may be hosted at Multan Cricket Stadium in case the political situation deteriorates in the federal capital due to PTI’s call for a long march at the end of May.