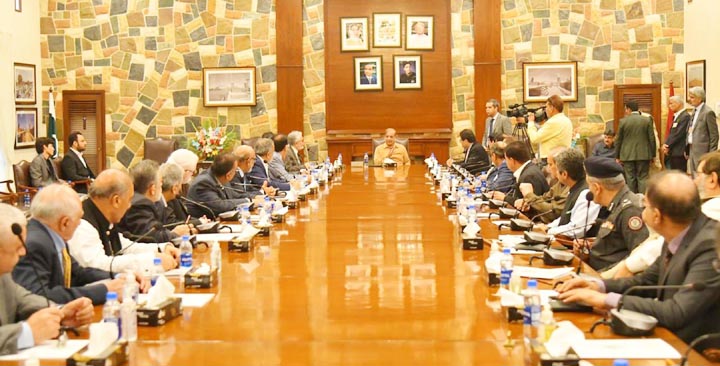 Prime Minister Shehbaz Sharif has said that he doesn’t have a “magic wand” to resolve all the problems of the country overnight, adding that the nation will have to work hard for progress.
Addressing a gathering of businessmen on Friday, the prime minister said that Pakistan cannot sustain imports of gas and petrol which cost the country $4 billion, saying the country needs to look for alternate sources.
“The objective of banning (import of luxury items) – for a specific time – is to save foreign exchange and bring stability. If we save $4 billion, this can meet our whole edible oil needs… This is like earning $4 billion,” the prime minister said.
He said the poor people living in Gilgit Baltistan, Khyber Pakhtunkhwa or Balochistan, struggling for their bread to eat, medicine to treat illness and clothes to wear, would feel neglected to see the elite enjoying the imported luxury goods. However, this ban on the import of such items would address that social imbalance.
“We have become an importing economy but to prosper we have to become exporters and our government will incentivise the exporters by giving them easy loans,” he added.
The prime minister said that there is a gap of $45 billion between the country’s exports and imports. “Even If we add the remittances, the gap still remains above $15 billion.”
He told the gathering that in 2018, the dollar rate stood at Rs115 which jumped to Rs189 during three and half years of the previous government. “When I took the oath, it (dollar) was at Rs189. This Rs 60-65 rise is not our fault,” he remarked.
He said having perceived the success of the no-confidence motion against Imran Khan, the previous government reduced the oil prices despite the country facing a huge debt burden. He said the ousted government neither provided relief to the common man in sugar, flour or edible oil, nor executed any agriculture or public welfare project with serious intention. He said with an 80% increase, the previous government obtained Rs22,000 billion in loans during its 3.5 years.
Talking about the problems of Karachi, the premier said that the port city’s biggest problem is a shortage of water, adding that Saudi Arabia wants to invest $1 billion to resolve the chronic issue. “I want all the stakeholders to come forward and give proposals including the government of Sindh, the MQM-P and the business community. In my opinion, we need to install desalination plants in Karachi and you will witness this problem be resolved in just a few years,” he added.
Rejecting a proposal by the business community to stop the supply of gas to domestic consumers, he said such a drastic measure will cause chaos in the country.