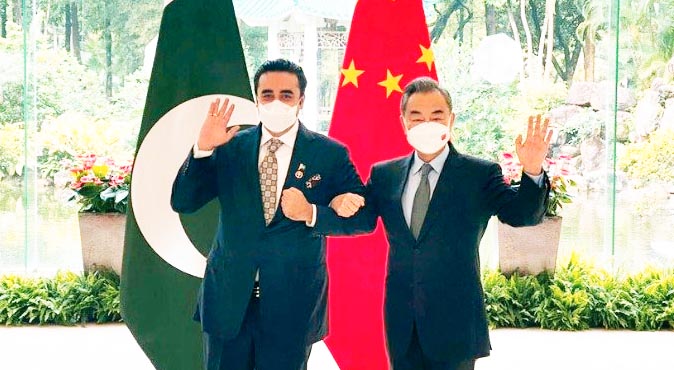 Pakistan and China have reaffirmed their strong support for each other’s core interests and major concerns and commitment to deepening strategic communication including at the highest political level and practical cooperation.
They also agreed to building an even stronger China-Pakistan community with a shared future in the new era, said a joint statement issued on Sunday at the conclusion of Foreign Minister Bilawal Bhutto Zardari’s two-day official visit to China.
Foreign minister Bilawal visited Guangzhou on May 21-22 at the invitation of State Councilor and Foreign Minister Wang Yi. It was his first official bilateral visit after assuming the office of foreign minister of Pakistan.
The visit coincided with the 71st anniversary of the establishment of diplomatic ties between China and Pakistan.
During the visit, the state councilor and foreign minister Wang Yi and foreign minister Bilawal held in-depth discussions on the entire gamut of bilateral relations as well as regional and international issues of shared interest.
The talks were conducted in a warm and friendly atmosphere, in line with the finest tradition of mutual trust and cooperation between the two countries.
The joint statement said the two sides agreed that amidst profound regional and international changes, the importance of China-Pakistan strategic relations has assumed even greater significance.
“As All-Weather Strategic Cooperative Partners, China and Pakistan share ironclad mutual trust and friendship, which is a source of peace, stability, and prosperity for the region and beyond,” it was added. The two sides noted with satisfaction the steady growth of economic cooperation between China and Pakistan. In this context, they agreed that China-Pakistan Economic Corridor (CPEC) has effectively improved Pakistan’s infrastructure and boosted its socio-economic development. “Both sides expressed firm resolve to synergizing development strategies, pushing forward all CPEC projects in a safe, smooth, and high-quality manner, promoting cooperation in areas such as economy and trade, investment, industry, agriculture, health, and science and technology, contributing to the peoples’ well-being and delivering greater benefits to local communities,” the statement said. The two sides expressed satisfaction at the growing momentum of bilateral defense cooperation and exchanges.
They underlined that China-Pakistan defense cooperation was in fact a factor of peace and stability in the region.
The two sides termed terrorism as the common enemy of humanity.
The two sides called on the regional countries and the international community to form synergy and fight terrorism in all its forms and manifestations. The two sides expressed their determination not to allow anyone to damage China-Pakistan iron brotherhood. –