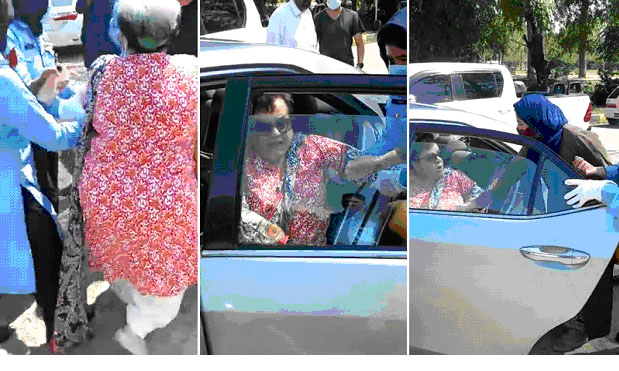 IHC CJ Athar Minallah had directed authorities to produce Mazari before the court at 11:30pm on Saturday.

“I still did not get my phone,” Mazari told journalists after arriving at the court, as police officials had reportedly taken her cellphone at the time of her arrest.

The ex-federal minister claimed that the police did not show her the arrest warrants before taking her into custody, adding that she believes PML-N, Prime Minister Shehbaz Sharif, and Interior Minister Rana Sanaullah were behind her arrest.

Mazari was presented in the courtroom at 11:40pm.

At the outset of the hearing, Inspector-General Islamabad Muhammad Ahsan Younas told the court that he assumed office today.

IHC CJ told the inspector-general that no member of the National Assembly (MNA), belonging to the PTI, has been de-notified yet and the court has already issued a directive that no MNA should be arrested before informing the NA speaker.

“There is one Constitution and the court runs on that Constitution […] the IG will have to take responsibility; I cannot say that the [court’s] registrar is responsible,” the IHC CJ said.

The former human rights minister, according to Geo News, was taken into custody in a case related to the encroachment of a piece of land in District Rajanpur.

In a three-page order, IHC CJ Athar Minallah said: “The authorities shall explain under what authority of law the fundamental rights of Dr Shireen Mazari were violated while she was within the jurisdiction of this Court.”

The IHC’s order came after the PTI leader’s daughter, Imaan Zainab Mazari-Hazir, filed a petition against her mother being “illegally abducted by officials of the Punjab Police”.

The court noted that the ex-federal minister was not de-notified as a member of the National Assembly, therefore, her arrest was not in line with the law as before any MNA’s arrest, the NA speaker should be informed.

The case against the PTI leader was filed at the request of Deputy Commissioner Rajanpur, after which, the Anti-Corruption Establishment Punjab registered the FIR.

Mazari is accused of encroaching upon a piece of land. A complaint was lodged against her on March 11, 2022, while AC Rajanpur was directed to inquire into the matter.

The official concerned prepared the report of the case on April 8 and in the light of this, the Anti-Corruption Establishment registered a criminal case under its Rules 2014.