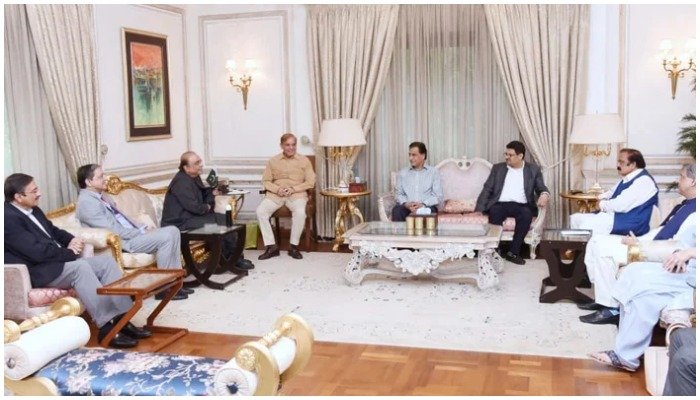 Coalition partners agree to tackle
political issues in the parliament

The government has decided to complete its constitutional tenure till August 2023 amid pressure from Pakistan Tehreek-e-Insaf (PTI) to announce early elections, Aaj News reported on Monday.
The decision comes a day after PTI announced to begin its long march toward Islamabad on May 25.
During the meeting, which was chaired by Prime Minister Shehbaz Sharif, the coalition partners also discussed a strategy to deal with the PTI’s long march.
Reportedly, the government has decided to restrain participants of the PTI march on the Kashmir Highway.
‘Long march’ to Islamabad on 25th
The government has decided to deal with the existing political situation in the parliament.
After a series of public rallies to build momentum for a month, PTI Chairman Imran Khan on Sunday finally announced the date of his party’s long march to Islamabad.
Addressing a press conference in Peshawar, he said he will meet the party workers at Kashmir Highway on May 25 at 3 pm. “I will meet you in Islamabad at Srinagar Highway at 3:00 pm on May 25. I want to see people from all walks of life in the Islamabad long march on May 25.”
Imran Khan said his party will never accept what he called the “government of looters” in any situation.
He warned if there will be any obstacles during the long march, they will take action.
Tabling his demands, the PTI chairman said: “We are demanding the date of fresh elections and dissolution of the assembly. We want fair and free elections in the country. Our style of politics is peace and our public gatherings are attended by people from all walks of life and women.