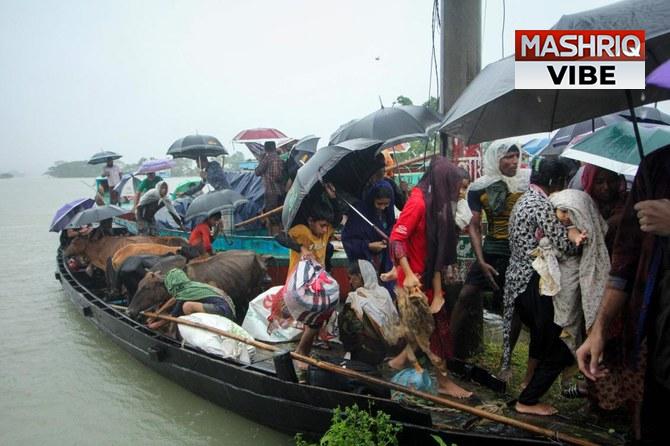 Military’s Inter Service Public Relations office said on its website that the soldiers have been deployed as floods have devastated the northeastern districts of Sunamganj and Sylhet, cutting off people from electricity as thousands of homes have been inundated.

At least nine people died across the delta nation on Friday after lightning struck amid rainfalls, the United News of Bangladesh agency reported.

In a statement, the government’s Flood Forecasting and Warning Center in Dhaka, the nation’s capital, said Friday that water in all major rivers across the country was rising. The country has about 130 rivers.

The center said the flood situation is likely to deteriorate over the next 24 hours in the worst-hit Sunamganj, Sylhet districts in the northeastern region as well as in Lalmonirhat, Kurigram, Nilphamari and Rangpur districts in northern Bangladesh.

Hafiz Ahmed, manager at the Osmani International Airport in Sylhet, said Friday that flight operations in the airport have been suspended for three days as flood water has almost reached the runway.

Last month, a pre-monsoon flash flood, triggered by an onrush of waters from upstream India’s northeastern states, hit Bangladesh’s northern and northeastern regions, destroying crops and damaging homes and road network vastly. The country was only recovering from that shock, but as the monsoon this year set in only a few days ago fresh rains flooded the same regions again.

Bangladesh, a nation of 160 million people, is low-lying and faces threats of climate change-related natural disasters such as floods and cyclones. According to the UN’s Intergovernmental Panel on Climate Change, about 17 percent of people in Bangladesh would need to be relocated over the next decade or so if global warming persists at the present rate.