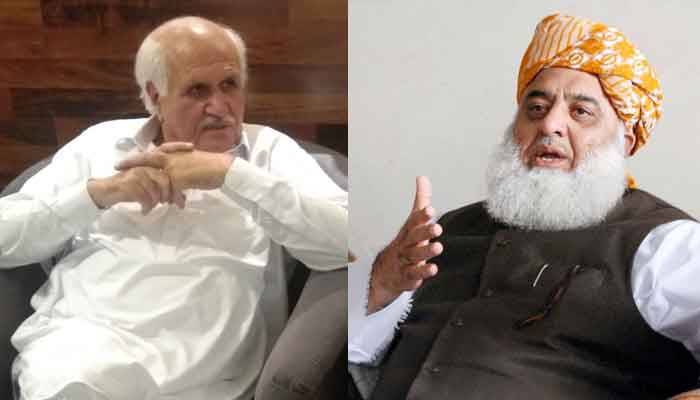 Maulana Fazlur Rehman while congratulating Liaquat Khattak said that the JUIF is a true political party and respect democratic values of mutual respect. He said that JUIF does not believe in politics unjust allegations and heaping insults on political rivals.

It may be recalled that a few days ago, Ahad Khattak had announcement in a statement that his father was going to join JUIF.

Maulana Fazlur Rehman said that Imran Khan has received foreign funding from United States, Israel and India and his end will be worse than Ashraf Ghani of Afghanistan. “The PTI leader is making laws on the direction of International Monitory Fund and Financial Action Task Force (FATF),” Rehman said. The Pakistan Democratic Movement (PDM) chief also said that PTI has ruined China Pakistan Economic Corridor which was the American agenda. “The PTI government has even made budget on the direction of external orders,” Fazl said.

On this occasion, Liaquat Khattak said that he has joined Jamiat Ulema-e-Islami and expressed confidence in his leadership. Defense Minister Pervez Khattak’s brother also said that the PTI government has failed to fulfill the promise of corruption free and today the “old Pakistan” was much better than PTI’s ‘new Pakistan’.

Liaqat Khattak said that the PTI government has destroyed the national economy and rendered millions of people unemployed. He said the Prime Minister Imran Khan had promised 10 million jobs and 5 million houses but now he has deprived people of their employment.